The following information has been reproduced with permission from the book
‘Rural Living MANUAL‘ 2nd Edition by author Bernie Webb.

Even experienced Fire Fighters have difficulty determining how far away smoke is from their present location.

What we need is a way to quickly figure out where the base of the smoke actually is and whether it is going to affect us? A relatively easy and accurate way to do this is with ‘Flight Radar 24’ and your forefinger.

First you need to load ‘Flight Radar 24′ on to your phone or tablet:

Run this (free) app up on your phone, scan the map in the direction and the vicinity of where you think the fire might be.

You will probably see one or more Helicopters or Fire Bombers, 10mins or so after the fire has been reported.  Click on one of the choppers and if its flight path (green or yellow line) is going around in circles that is probably where the fire is. 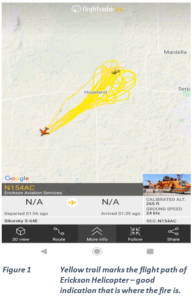 Pressing the grey arrow in left hand corner of the screen (not shown here) will centre the screen on your position and of course pinch/spread your fingers to shrink/enlarge the area displayed.

You are probably wondering what your forefinger has to do with all this.  Well, thoroughly wet your forefinger and hold it up in front of your face while you are facing towards the direction of the smoke.  If the side of your finger facing the smoke is the coldest, then you could have a problem, depending on how far away you have ascertained the fire to be. This reveals that the wind is blowing directly towards you from the direction of the smoke (fire).  You may have to put your ‘Fire Plan’ into action.